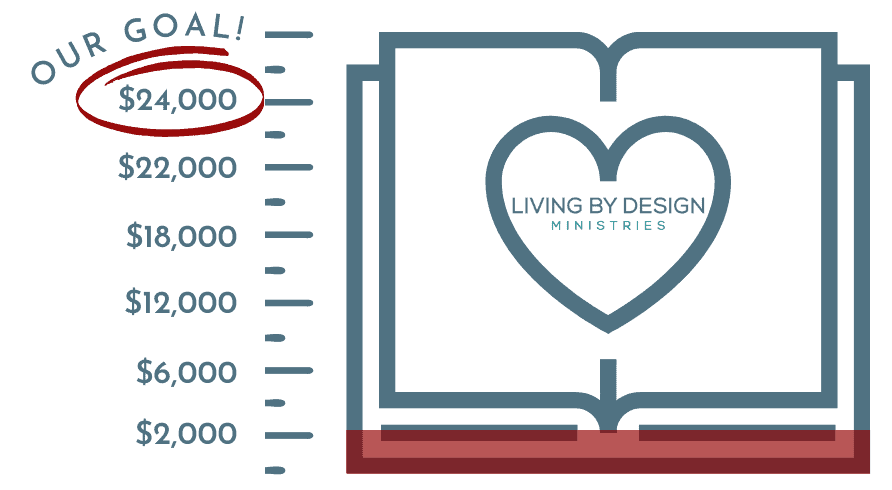 To kick off the 2022 Giving Season, we have secured $12,000 in matching gifts from faithful supporters of Living by Design Ministries. This means that EVERY dollar donated will be DOUBLED (up to $1,000 per donor) through midnight on December 13, or until the matching funds are exhausted. Will you prayerfully consider partnering with us in our mission to deliver free Bible studies to inboxes worldwide?

GIVE TO LIVING BY DESIGN

Three Parables for When You Feel Lost { + A Free Bible Study} 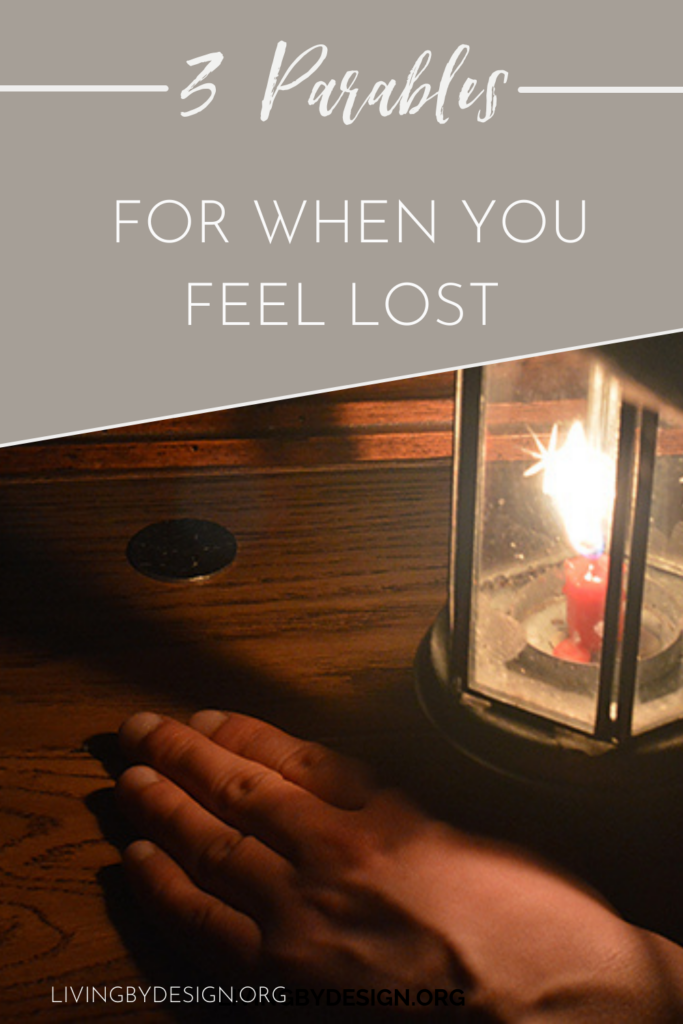 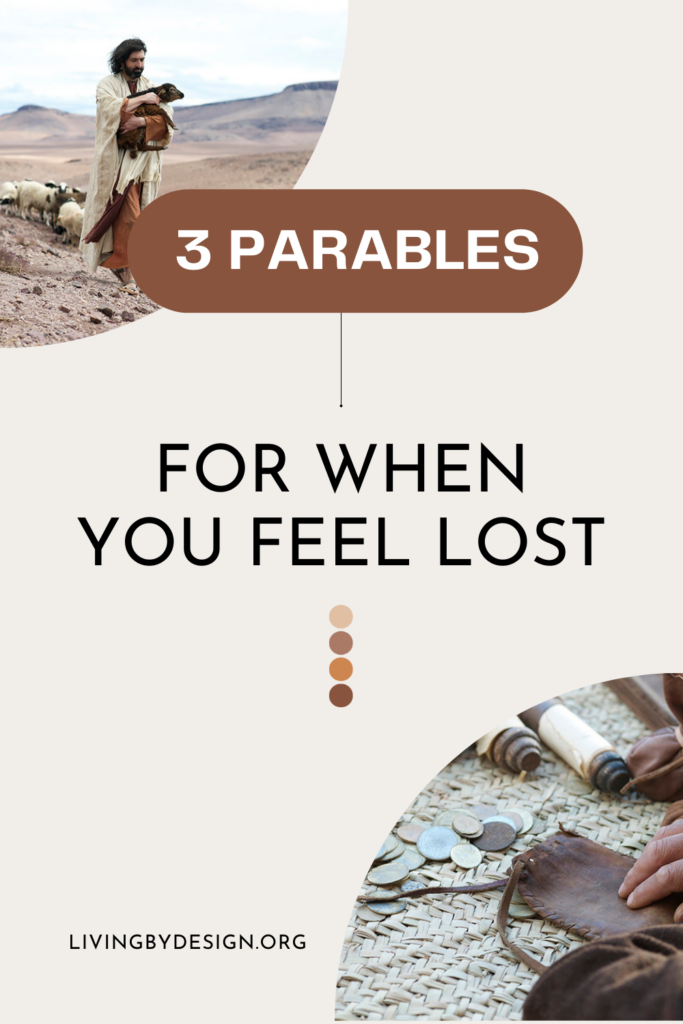 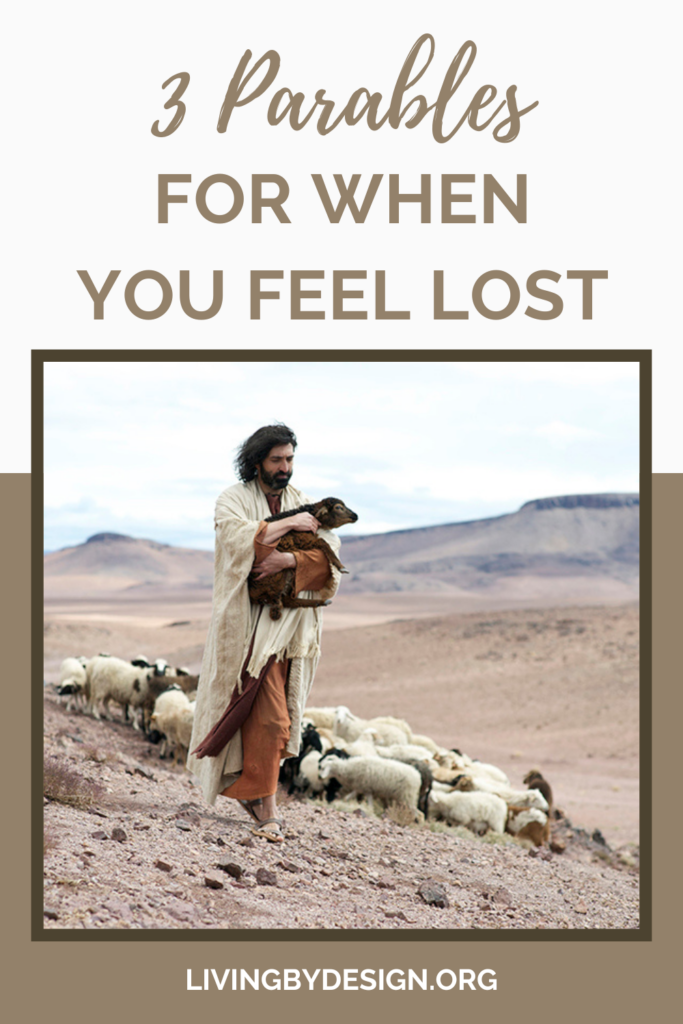 Jesus was a master storyteller.

To help people understand the things of God, He knew they needed to hear stories they could relate to

Common ground stories invite us in and bring a sense of familiarity.

In Matthew 13, the disciples asked Jesus why he spoke to the people in parables.

He responded by quoting one of the Old Testament prophets:

Isaiah’s prophecy is fulfilled in them, which says: You will listen and listen, yet never understand; and you will look and look, yet never perceive. For this people’s heart has grown callous; their ears are hard of hearing, and they have shut their eyes; otherwise they might see with their eyes and hear with their ears, understand with their hearts and turn back— and I would cure them. — Matthew 13:14-15, HCSB

When we read the parables of Jesus, we should begin by asking God to open our hearts, our ears, and our eyes.

It also helps to take note of the context surrounding the story. Here are some good questions to ask:

In Luke 15, we read three parables about lost things.

If Jesus felt the need to make his point by telling three separate stories about the lost being found, he must have deemed it important.

It must be very important to Jesus that we all find our way home.

It must be very important to Jesus that we all find our way home. Click to Tweet

The Context for Three Parables for When You Feel Lost

“All the tax collectors and sinners were approaching to listen to him.” Luke 15:1 HCSB

Let’s take a closer look at the context of these three parables that Jesus told.

In the previous chapter, Luke 14, Jesus ate Sabbath dinner at the house of one of the leading Pharisees.

He told parables at that meal too.

In the next chapter, Luke 16, Jesus told His disciples a parable, and the Pharisees were again listening in on the conversation.

This was not the synagogue-going crowd, although we read that the Pharisees and scribes were there too (Lk 15:2). Instead, it was an audience of tax collectors and sinners.

They noted Jesus sitting at the table with the likes of these and voiced their disapproval.

Three Parables for When You Feel Lost

Here are three more questions for you to consider as you look at the three parables for when you feel lost:

Keep these questions in mind as you consider the following parables.

“I tell you, in the same way, there will be more joy in heaven over one sinner who repents than over ninety-nine righteous people who don’t need repentance.” – Luke 15:7 HCSB

If there wasn’t a shepherd in the crowd that day, the people at least knew a shepherd, for it was a major occupation in the region.

Jesus asked them what shepherd wouldn’t leave behind ninety-nine of his sheep to go find the lost one?

“I tell you, in the same way, there is joy in the presence of God’s angels over one sinner who repents.” – Luke 15:10 HCSB

In the second story, Jesus told about a woman who had ten silver coins, and she lost one.

Who in that crowd had not lost a coin?

Especially the tax collectors and the money counters among them.

Jesus no doubt had their attention.

The woman lit a lamp, swept the house, and searched carefully until she found the coin.

This woman celebrated with her friends, for the one silver coin had been found.

Jesus no doubt had their attention: He told parables to speak to their hearts. Click to Tweet

“Son,” he said to him, “you are always with me, and everything I have is yours. But we had to celebrate and rejoice, because this brother of yours was dead and is alive again; he was lost and is found.” – Luke 15:31-32 HCSB

The parable of the prodigal son is perhaps the most familiar of the three lost stories.

A father had two sons, and the youngest decided he wanted his inheritance early, while his father was still living.

Upon receiving it, he left home and lived wild and free.

Again, the tax collectors and sinners might have been living this very scenario, for perhaps they had rebelled against their families.

Can’t you see them leaning in?

The son spent everything he had. Then a famine came over the land, so he took a job feeding pigs, longing for the very food he fed those pigs.

The boy then came to his senses (a Greek expression, which also means “to repent”),  and realized his father’s hired hands had more than enough food, while he was starving.

He decided to return home, no longer as a son, but as a servant.

His father, though, would have none of it.

Comfort for When You Feel Lost

“But while the son was still a long way off, his father saw him and was filled with compassion. He ran, threw his arms around his neck, and kissed him.” Luke 15:20b HCSB

The father did not meet him halfway.

We do not serve a halfway God.

Our Father is always ready and willing for us to come home, no matter how far we’ve wandered.

You won’t be a servant. You’ll be restored as a daughter or son.

Our lives with Jesus are living parables.

The everyday things in our past, present and future testify to the things of God and how he works in and through us.

Your story can help the lost find their way home, too.

God in heaven and all His angels rejoice when spiritual lives who were once dead come alive again!

“Being lost” doesn’t only refer to the salvation of our souls.

How many times do we distance ourselves from God? From the fellowship of other believers?

The call cries out across the ages, “Come home.”

Stories remind us we dwell among one another. An early church father, St. Anthony the Great, wrote, “Our life and our death is with our neighbor.”

What Jesus taught the crowds in parables still applies to us today, although our worlds are very different.

Stories and parables still tell us the things of God.

They lead us home.

In order to support you in your personal study of Christ’s stories, we’ve created a free 7-week parables Bible study.

This e-mail-based Bible Study consists of thirty-five lessons delivered over the course of seven weeks (with two rest days each week).

Thanks to the generous donations of our Discipleship Team and our Support Team, this study is available for free to anyone who wishes to participate.

All you need to complete our free parables Bible study is 15-minutes per day, an e-mail address, and an open heart.

Traci Rhoades is a writer and Bible teacher who lives with her family outside of Grand Rapids, Michigan. She is the author of the award-winning Not All Who Wander (Spiritually) Are Lost. Her next offering, Shaky Ground: What to do After the Bottom Drops Out, is written for Christians and the spiritually curious, who wonder how a life built on Christ’s solid ground can make a real difference in our own lives, and in our communities and churches. Connect with Traci on her website, Instagram, Twitter, Facebook, and Pinterest. 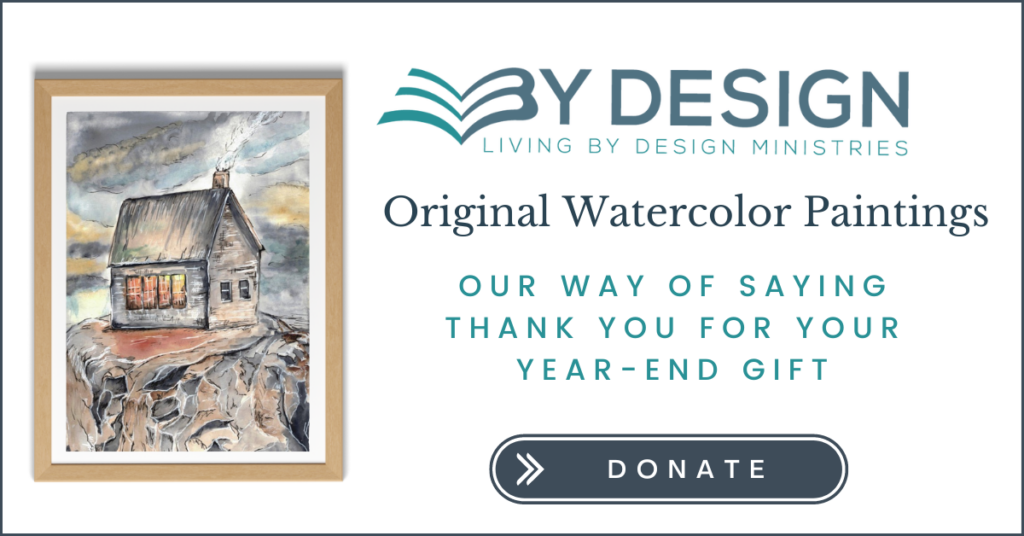 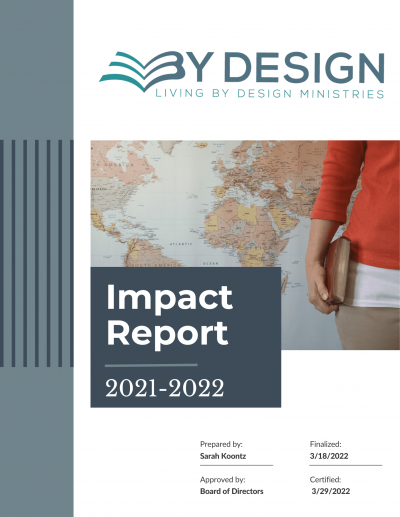 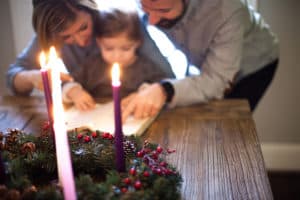 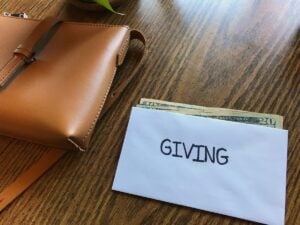 Donations will be Doubled through December 13! | 2022 Matching Fund Drive 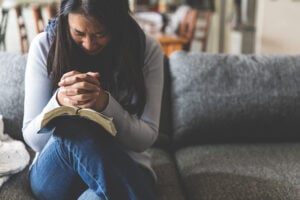 How the Bible Can Help You Overcome Fear in Hard Times 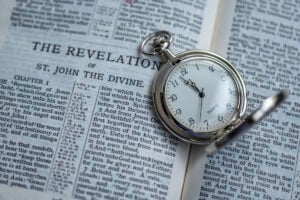 What Every Christian Needs to Know About the Book of Revelation 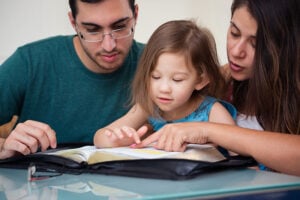 Moving from Commitment to Completion 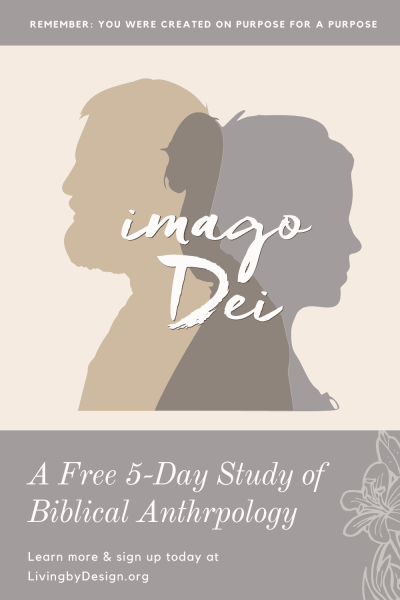 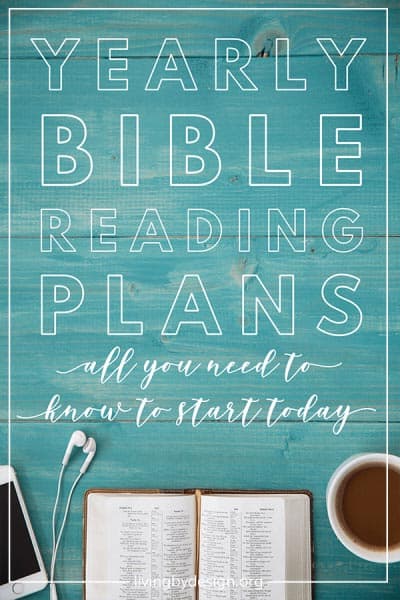 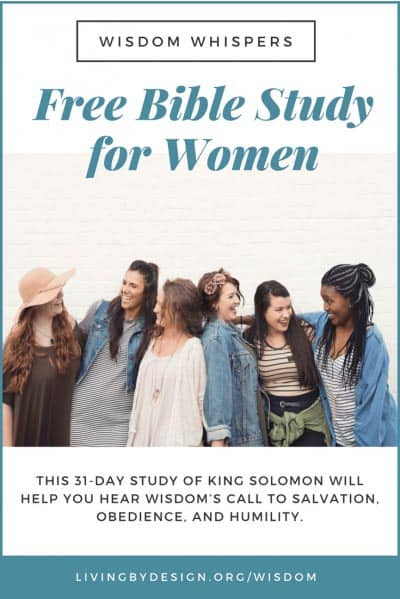 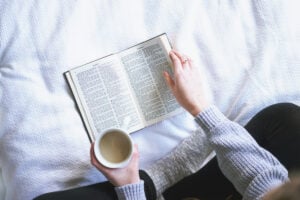 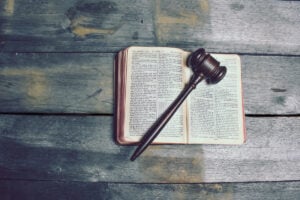 Biblical Justice vs. Social Justice | What’s the Difference & Why Does It Matter? 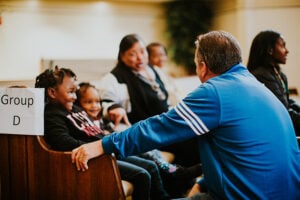 10 Ways to Cultivate a Family-Friendly Church